Full Length, October 2011
World Terror Committee
''Searing Fires and Lucid VIsions'' is the debut offering by this relatively new and obscure Belgian black metal horde called 'Adustum'. It was released by the infamous World Terror Committe during October 2011.
My first experience with their music was through a sample which I had heard through some thread on NWN! forums last year and it had certainly appealed me. A few months later, I received the promo CD for an extensive review and that really made me curious about the adversarial currents which this young horde had to offer through their craft.
Adustum is latin for ''set fire'', ''light'', ''kindle'' etc. and the name really suits the Qlipothic energies which this album has channeled through its sonic rituals. The opus begins with the splendid ''V.O.H.I.R. - Exvocatium Daemonicus'' which is a hymn meant to conjure the inner daemon within your spiritual embodiment. This ritual's verses have been conjured in an allegorical manner and a profound study of them indicates that they are directing towards creating your own daemon through ritual invocation.
''ÏAÏ Daemon!
Salutifer - you are me!
Daemon - I am you!
Entwined become, many and none.
Symbiotic releaver, you've shown me to the way to extatic liberation.
Khaotic redeemer, I now cast you back from this shell into thy haven''
The second hymn on the opus ''Ravenous Copulation Upon Her Altar of Catamenia'' is another interesting tale about a malignant copulation with the serpent, the harlot, the aduletrous woman - Reshut ha-Rabbim to obtain wisdom and power.
''Uttering the names of Damnation
Eating Her cunt of red pettles.
Moaning those verbs of coronation,
when devoured by Her emanation.
Furosiosly devouring her body,
submerged in the ashes of Reshut ha-Rabbim.
Drowning Her in semen, thus closing the circle,
Nine others, are revealed.
And you, my whore, are worshipped & revered.''
The third hymn ''The Eulogy of One Through Three Times Three'' is perhaps the most allegorical and lengthiest one on the opus, clocking around 11 minutes. Apparently it delves deeper into the metaphysical gardens of the Qlipoth and talks about the Kelipah and Choronzon. These lyrics are open to interpretation and followers of the Qliphotic Qabalah would probably comprehend its essence.
''I see now the bends and amends of Choronzon as my guide.
To devour your harnessed slither and partake of limitless strenghth there in.
Disposing of feeble skin and awakening the Beast of Sin.''
Finally the grand opus comes to and end with the final hymn ''Psalm CLVI - The Rites of Lunar Blood'' which is a ritual to invoke Babalon - The Scarlet Woman, The Great Mother, or the Mother of Abominations. It is my favorite and perhaps the best creation on ''Searing Fires..''. This hymn clocks around 9 minutes and includes some impressive ritualistic percussion, over exotic and almost oriental sounding guitar rhythms; hence enriching the esoteric atmsophere on the opus.
''From the remnants of the Fallen Empire of Two Streams, under Crescent Moon, you are the unquenchable Star of Aeons and Temptress of all who wander freely and obsessively for Your Wisdom, Magick and Perfection, as an Envoy of Therion, and Guardian of Venus.''
After several attentive listens and dissemination of their lyrical content and aesthetic which I have presented above, I can easily declare that Searing Fires and Lucid Visions is one of the better black metal albums which I have heard in a while. This is black metal executed in the way it should be. Esoteric, spiritual and underground. Of course, everybody has their own definition of black metal but for me, this is the kind of art I prefer listening to. The instrumental execution on the album is fluent and its apparent that the members know their music and have persevered to create their own path by being influenced by the adversarial gnosis. If you are an admirer of occult, ritualistic black metal a la Ofermod, old Glorior Belli, Nefandus etc. then this is an album which you must obtain. Their musical influences are apparent but what makes this album worthwhile is the fact that they have been able to present their ideas in their own, unique manner, hence giving a great kick-start to their creative energies. The pslams reflect devotion and spiritual ascension and are well played without being redundant and uninspired. They are easily memorable and possess a great charm. However the only shortcoming on the album is that its length is very short for a being categorized as a full length. The album booklet could have been better and more comprehensible too. But these are minor flaws which I am sure that the horde would certainly improve on for their future works.
Obtain a copy of the album and immerse yourself in the grand occult demenaor which it emanates!
Official Temple of Adustum: http://users.telenet.be/teo/xxiii/
Facebook: https://www.facebook.com/adustumofficial 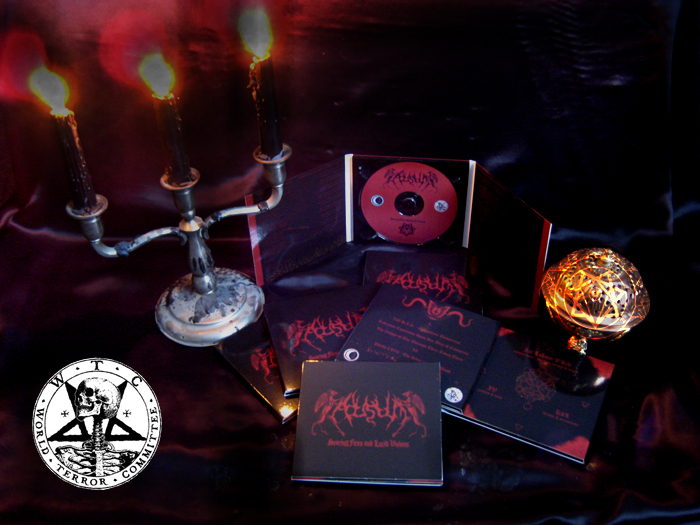