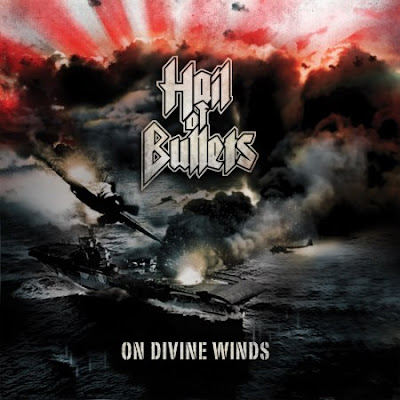 Full Length, Metal Blade Records
2010
Its been around half a century since the cacophonies of the World Wars tormented the earth but those horrific memories can't be ever ceased from the planet. The ones who witnessed those, can hardly ever get over the gruesome nightmares which haunt them every night. The slightest feeling of the carnage which  had raced around the world like wild fire, gives an excruciating feeling of despair and grief.
The modern day man relived those blacekend memories via the various documentaries, movies and other features made on the wars. Many of them actually resurrected the vile scenarios of the war and personified the doom-stricken chaos lands, quite suavely.
But history was about to repeat itself in 2006, when 5 men from Holland geared up their armors and artilleries and marched ahead to de-construct brutal ballads of war. They aptly named this congregation as ''Hail of Bullets'', with the solemn aim of portraying the scenes of WWII with their musical spectrum. This bandwagon comprises of many veteran death metal stalwarts who have been highly influential for the genre since many years now. Headed by the charismatic Martin Van Dru
nen (Asphyx, Pestilence, Comecon etc.), they also have Paul, Stephen and Theo from the legendary Thanatos on guitars and bass, respectively. The battery is being manned by Ed Warby of Gorefest fame. Quite a line-up, isn't it? And they don't disappoint in any manner.

Their first release was a self titled demo in 2007 but the stellar highlight was the spectacular ''...Of Frost and War'', released in 2008 which was a masterpiece war themed death metal album. The trademark vocal assaults of Martin and an extremely heavy and crunchy guitar attack made the album an intensely gratifying sonic treat. 2009 was trembled by yet another release called as '' Warsaw Rising''. It was a 6 track EP, featuring a few live songs and a Twisted Sister Cover.
Enter 2010 and the band unleashed their 4th offering entitled as ''On Divine Winds'', released by Metal Blade Records. This second full length album by Hail of Bullets is yet another militaristic death metal onslaught and it has helped in establishing the band's trademark sound. Lasting around 48 minutes, this venture boasts of 11 well composed and atmospherically adept tracks which keeps the listener driven towards the edge of insanity.
Kicking off with the symphonic war hymn ''The Eve of Battle'', this mini World War package continues to ravage ahead with bestial tracks like ''Operation  Z'', ''The Mukden Incident'' and the thrashy ''Strategy of Attrition''. On the other side we have some really nicely carved mid paced tracks like ''On Choral Shores'' and the fantastic ''Tokyo Napalm Holocaust''.
The straight edged guitar attack comprises all the formulas of a perfectly headbangable old school record. But it doesn't really contain the panache and razor sharp, catchy mood of ...Of Frost and War. The drums aren't too heavier and ball-sy like the first full length but overall it doesn't hamper the record for being a great and enjoyable one. The production values are pretty neat and would cater to the needs of the newer era death metal fans too.
I would sum ''On Divine Winds'' as a conceptual album like its pre-decessor but this was a somewhat different approach than the first album. Its a mixture of mid paced, thrashier and some groovy double bass sections which are enough for a fan of true death metal to enjoy it. What is more important is that we have an ensemble which is able to portray the ravishing atrocities and scenarios of the ghastly World War II with a great musical edge. Fans of War themes and death metal have a reason to cherish since they can enjoy both the entities in a delirious mixture, all thanks to Hail of Bullets!
Check out the band here -
http://www.hailofbullets.com/
http://www.myspace.com/hailoffuckenbullets
Final Rating - 7.8/10
Posted by Ankit at 5:17 AM