AVICHI’s 2007 debut ‘The Divine Tragedy’ was certainly a monumental release. Four years later, in 2011, ‘The Devil’s Fractal’ reveals an even greater depth to Avichi’s soul entity, Aamonael’s great work. It is a journey through Aamonael’s own divine hell; where he is both God and the Devil, the light and the dark, the all and the nothing, the Absolute. Infernal Dominion’s Clavdia Adimiron recently conducted an interview with Aamonael. In his own words…

Greetings Aamonael. Are there any books, artists, or musicians that are currently keeping your interest?

I’ve been reading some books by Yogi Ramacharaka which deal primarily with occultism, the seven principles of man, and eastern mysticism. These books aren’t specifically focused on the dark arts but are written from a more all-encompassing view of the Absolute. Much of it stems from the foundation of Yoga and its teachings. However, I believe anyone from any walk of life can use them for his or her own self or selfless interest. The power of the will is real magick.

So I’ve been reading some of that, but honestly, I don’t read as much nowadays as I used to when I was younger. I don’t really have the time, and let me be honest, I am a man of the world and enjoy experiencing it! An interesting note is apparently the books by Ramacharaka were never written by the stated author but were instead the written collaboration between the author’s pupil, Baba Bharata, and a lawyer turned yogi, William Walker Atkinson. These books were written two centuries ago which might lend to its ‘occult’ value.

Adding to this eastern Indian flair, I’ve also been listening to some Ravi Shankar and stuff with Indian female vocals. Ragas have a beautiful expressiveness to them. My knowledge and understanding of Hindu music isn’t as broad as the music of the west. I’m sure what I know is just the tip of their iceberg. Of course being a composer, I can still hear the subtleties of their sound and how moods are created through it. Regardless of my current knowledge, there are many elements from the Hindu musical culture I wish to incorporate into future songs for Avichi.

Lately I’ve also been re-appreciating the mechanical and futuristic vibes from Skinny Puppy. Dark and ominous. As for metal – I’m really into this new Craft album ‘Void’. The power of the riff baby. The essence is so fucking there it’s almost tangible. Seriously this album is amazing. The album cover perfectly depicts how I felt when I woke up this morning…

What is the philosophy behind AVICHI?

Avichi is a spiritual hell brought about by various passions if there exists an attachment to such passions. Sometimes even a hell consciously embraced if need be in the refusal of absolute connection. I’m totally fine with there being a gulf of space between me and my neighbor. The eastern monk might say your fellow human beings are a reflection of you, if perhaps at a lower spiritually evolved state. I still have a problem with seeing the shit of the world reflected in me.

But maybe it is true and we are all connected to one another – each a grain of sand in the infinite desert. It seems pretty shitty to me because there’s so much hideousness and ridiculousness in the world. But I guess if you’re going to have the infinite, you’re bound to end up with what there currently exists at some point. Total chaos sounds like a more desired option to some organized absolute, but even then - who is the Instigator?

From what I’ve recently read, the Absolute, which is The ALL – eternal and all-knowing, has always been and was never the result of a cause. Nothing instigated it. It lies behind the veil of everything, but it is also the veil itself. The mind of man may be able to intuitively perceive of eternity beyond the Universe, but the intellect cannot conceive of it. Thought creates the reality in the Relative – the thoughts of all of us and of course the Universal Mind which is not the Absolute itself but an emanation of it. The Great Mystery is Why the Absolute would so manifest itself to let the universe play out as it so does with you and me in it. I have no answer and neither did the book, but I enjoy the provoking idea.

As there seems to be an upward trend of discarding the conditional, Matter, and embracing the unconditioned, Spiritual, there is the idea that everything is moving in an upward trend back into the Great Flame, a Sun from which each thing is just another ray of light, but all part of the one.

Let’s talk a bit about light. You have the pure white light of understanding and compassion which is what people tend to associate God with. You also have light of a different nature which is the fire created through passions and desire. In all likely-hood they’re probably just opposite sides of the same coin. Both have the potential to dissolve the individual in the end. It’s a great play, and you’re right in the fucking middle of it. Have fun.

This is all just some interesting food for thought. No more. No less. It could be everything I just mentioned is all a lie, there is no Absolute which holds the truth of it all, and everything is just a lie given breath by a lie. I will continue to play my part in life’s drama as I see fit, indulge in what exists thoughtfully, and continue making music however possible regardless. It’s what I do, and what I like to do. You asked me what the philosophy of Avichi is; this is the type of shit I deal with when it comes to Avichi.

How did you decide upon the name AVICHI? In what way did it call to you when searching for the name to represent your expression?

It represented exactly where I was and how I felt during that part of my life.

Profound Lore recently released your newest album, "The Devil's Fractal". What is the significance of its title, and what are some of the themes present within?

I’ve been asked this question a few times already. I’m not sure if my previous answers will match up to this one, but here it goes. It deals with some of the archetypes of Satan, and it emits a strong Luciferian outlook from start to finish. It is about the ego, beaten down, willing to sacrifice and destroy everything in order to preserve itself. Salvation by salivation.

I personally found your first release "The Divine Tragedy" more abstract in nature, where as the "Devil's Fractal" seems to take on a systematic chaos while still retaining that AVICHI style. Was this the result of a natural development, or did you purposely bring the music into a different sphere for this release?

I wished to pay homage to the devil, and I did so as best as circumstances allowed me to. 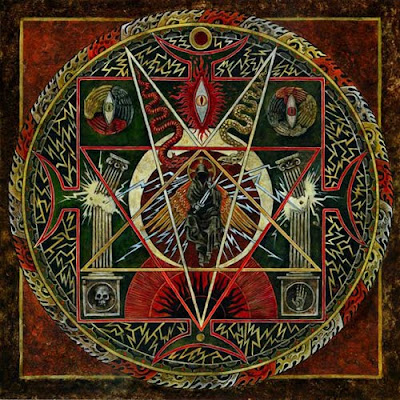 Do you use any specific techniques when channeling your art; such as meditation, hallucinogenics, or other mild-altering processes or substances?

I read many books dealing with the history of the devil, various personifications of evil, and of course used my own thoughts and experiences from this life. I’ve done my share of hallucinogens when I was younger, but it’s been many years since. I don’t feel they have anything new to show me anymore. The only time I can really picture myself doing some kind of hallucinogen again would be peyote in the desert, or taking the Ayahuasca formula in the Amazon rainforest. If such an experience took place, I would see it as a necessary experience. Honestly, I feel I have the ability to see the truth within without such exterior methods.

I do practice a bit of meditation and yoga breathing exercises. As I was saying, I try not to rely on things outside of me for power.

I recently learned that AVICHI will never perform live. Is this something you might reconsider for the future if the right people were to come along, or are you firm in your resolve to keep Avichi exclusively a recording act?

I’m the only right person. I’m more interested in creating a work of art, pausing briefly, and immediately moving on to a new piece of art. I was always extremely attached to my music in the past, but I’m finally getting over the feeling. This attachment has always been so performance limiting. The quicker discarded the better. I’m open to having guest appearances on the next recordings. 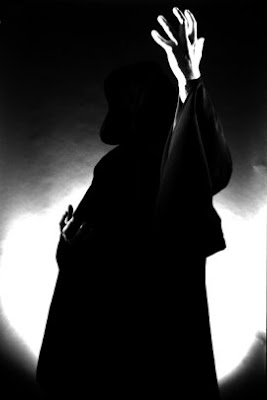 What effect do you hope for AVICHI to have upon those who listen with intent?

At what point in your life did you realize you were drawn to the darker realms of existence?

The moment I eagerly suckled my first breast.

Is there a specific ancient culture, its mythology and/or teachings that fascinate you?

Sorry, I can’t think if anything specific. I see something of myself in all cultures, and that is fascinating unto itself. One thing I would like to add though – we should bring back the gladiatorial age and erect a new Coliseum out of stone. I’d buy season tickets to that.

Thank you for granting me this interview. Any closing remarks?

And now back to drumming…

Email ThisBlogThis!Share to TwitterShare to FacebookShare to Pinterest
Labels: 2011, Avichi, The Devil's Fractal