I once had a conversation with a friend about our respective interests in music and I declared that I preferred listening to dark, depressing music. Naturally, he could not comprehend why I would choose to listen to something miserable and despondent and not something upbeat and lively. I guess, the experiences in my past explain my affinity towards this type of music, but I always wonder why people are scared to explore the darker and the more gloomy side of life. Why are they scared to explore the darkness within them? I never understood this, but whenever I want to do just that, Reclusiam’s debut is the first album I reach out to.

To put it simply, this album captures the true essence of depression and loneliness in its music. Musically, it is flawless and radiates emotions of emptiness and solitude with every passing second. The music is minimalistic and melancholic. Each song is 10+ minutes long, as expected with funeral doom. It is your typical funeral doom on this first listen. The long drawn out chords, the slow plodding drums and deep harsh vocals; But what is truly amazing about this release is how Ryan Henry has taken all his influences and added his own touch to it. There is something about this release that makes it different from most other funeral doom albums that I have heard.

Every track is similar. It starts off with “Parasellar” which is quite possibly, one of the best tracks I have heard in this genre. The riffs are extremely slow and lifeless. Its as if he only plays a chord once every 10 seconds or so. The vocals and nice and low growls, but are used sparsely. The atmosphere is stunning. The organs and the violin intertwine to form melodies that are so full of despair and despondency that you immediately wonder what mental state the musician was in when he wrote it. The last 3 minutes of ‘parasellar’ with the violins and organs playing together is possibly the most haunting piece of music I have ever heard.

The other tracks are also on the same level, which is brilliant. ‘Litanies of rust and decay’ is next. The song just explodes with a slow, plodding riff and some spoken vocals/growls. The vocals are brilliant and add another dimension to the sound. It sounds as if he is dying slowly and is sinking into despair. The sitar used in this track is brilliant and adds to the atmosphere. ‘Enim Corpus Meum’ is the third track. The song starts off slowly and repetitively, and just as you begin to feel overcome with emotion, the drums and guitar bursts out. The song continues on a slow pace till the end where it picks up and unleashes a tirade full of misanthropy and hatred.

The best thing about this album is the atmosphere. It is claustrophobic and crushing. It sucks you in even before you realize it and does not let go till the end. The production is perfect, with no instrument upstaging the other. Most importantly, the guitar tone is perfect but the main focus is on the keys. The songs are long, but at no point do they become tiresome.

In conclusion, this album is perfect for people who like funeral doom. Its slow, dark and depressing. It will leave you thoroughly disillusioned with this world…this life…with humanity.
Posted by Gautam at 6:40 AM No comments: 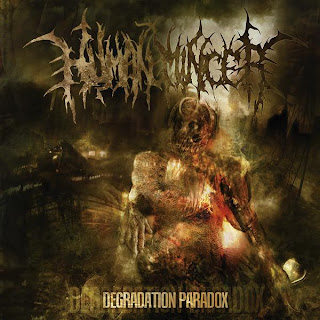 Spanish brutal death metallers Human Mincer have returned with their latest venture entitled as ‘Degradation Paradox’ after a long hiatus of 3 years. They shot to fame in the Spanish underground scene after the release of their first demo ‘’Grotesque Visceral Extraction’’ in 1999 and there hasn’t been any looking back since then.

Their earlier full lengths ‘’Embryonized’’ and ‘’Devoured Flesh’’ were instrumental in making them a household name in the underground scene. The band has been marred by frequent line up changes since their inception but it didn’t really hamper their immense focus towards composing some extremely sick and technical music to charm the loyal followers of the BDM scene.

Human Mincer’s career took a huge turning point when Carlos (Vocals) and Antonio (Bass) decided to leave the band during the summer of 2006. The guys who were recruited to fill in these vacant positions were none other than Phlegeton (Vocals) and Guillemoth (Bass) from the bizarre Spanish Brutal Death Metal band ‘’Wormed’’. This new incredible line up was then ready to massacre the weak in the most heinous way possible.

In January 2008, the newly formed line up entered the studio to work upon their third album to be released by Brutal Bands which is undeniably one of the most revered DM record labels in the world. They had earlier worked with Xtreem Music owned by the legendary Dave Rotten which had released their first two albums.

Their earlier sound was very much reminiscent of Disgorge (USA) and similar other American Brutal Death Metal bands but now it can be pretty easily compared with the sound of Wormed with more variations and intricate song patterns. The inclusion of the profane duo from Wormed was subservient in giving them their new implausible sound.

This 27 minute juggernaut unleashes a relentless assault on the eardrums of the listener containing every ingredient to be served in front of multitudes of fans hungry for a truly barbarous display of blasting Brutal Death Metal.
It should have been come out with a warning sign ‘’Beware of serious neck breaking headbanging’’ in my opinion. An absolute inhumane slab of gravity blasts, inhumane riffs and monstrous vocals makes you jump with ecstasy everytime you play this record.

As far as the individual performances are concerned, Miguel’s guitar skills have been absolutely astonishing and awe-inspiring throughout the record. His playing style is not anything much different from the other guitarists in the scene but the reason why he receives an enormous appraisal is the way he has executed them. There has been an intelligent usage of groovy, thick downtuned chugs (Not the slam death metal types though) intertwined with frequent tremolo picked, palm muted riffs and occasional pinch harmonics. Abrupt tempo changes and innovative rhythm sections also highlight the amount of dexterity been exuded by him. The sumptuous production by BB also compliments his hard work very dearly.

Talking about vocals, Phlegeton has been a total monster on the mic on DP. He has been instrumental in devastating the auditory senses of the listener through his loathsome brand of ultra low gutturals. He sounds like Leatherface’s chainsaw persistently buzzing with angst and craving to savor the taste of bright red human blood. His vocal style is basically categorized with very low frequency croaks and squeals and the amount of adroitness which he employs while unleashing them out of his throat is simply phenomenal! I became a huge fan of his vocals the day I heard Wormed but the performance in this CD made me worship him.

This multi-talented musician has been active in the Spanish underground scene since quite a long time, playing for various other bands like Unsane Crisis, Infernal (Col), Banished from Inferno etc. where he also plays drums apart from doing vocal duties. He is also a well know illustrator and graphic designer in the underground DM scene and has designed cover arts and logos for various bands like Avulsed, Mortician, Disgorge (Mex), Gloria Morti, Benighted, Kronos, Revenant, Funebre, Guttural Secrete, Wormed, Reinfection, Impure, Golgotha, Embryonic Devourment, Vidres a la Sang, Infested and Human Mincer’s Degradation Paradox too. So, total respect for him.

The drums on this album have been totally exceptional. I remember watching a live footage of David’s drumming skills on the song ‘’Dyskinetic Martyr Modification’’ and was awestruck watching him. He appeared totally inhumane there as he did on the CD.
This album would not have sounded so epic without the earnest efforts of this gentleman.
His incessant gravity blasts have left a profound impression on me and through that I can easily put him in the league of the most talented drummers out in the scene today.
What is even more brilliant about him is that he hasn’t allowed the drums to overpower the guitars by maintaining a prodigious variance on his playing speed.
He has also succeeded in playing the slower groovy parts with much ease and combining them with the ferocity of his blasting skills.

The production level is also very impressive and has been the most prominent factor in giving the dark and thick sound which this album boasts of.
It’s a record which you will love to blast on your speakers at full volume to give a heart attack to your grouchy neighbors. The word extravagant would be just an understatement to describe the grandeur of this magnum opus.

It possesses a unique charisma which makes it sound pristine even after giving over a zillion plays. There is no such moment where you would feel like interrupting the CD and switching over to another record. So, I advise all the guys who are desperate to experience an unpretentious and insane onslaught of original and bizarre Death Metal to get a copy of this record and blare it loud on your music player. You would be left more than satisfied.

Check out Human Mincer on their official Myspace
http://www.myspace.com/humanmincer
Posted by Ankit at 6:04 AM No comments: