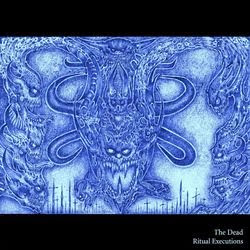 Whenever I get fed up of the brooding chaos in my daily life, I always try to find something splenderous and compelling. An entity which would simply give a straight thud onto my face with a full frontal blow and breaks my cranial chords. Yeah, sounds like a whacky idea but being an extreme metal fanatic, I can't expect something whiny and chirpy to enrapture my wicked senses. I was hunting greedily for a similar object a few months back when I chanced to obtain this CD called as ''Ritual Executions'' by ''The Dead''. I didn't exactly know as to what I should expect from that disc and I simply popped it in my player with a child like curiosity, as always.
After a few seconds, I observed a very despicable swarming sound which was ejaculated by my computer speakers. That ''sound'' soon grew into an intensly gratifying plod of ominous and eerie wall of droning sonic incantations. It began in a very loathsome ritualistic demeanor and I started getting waves of impious contempt as soon as the vocals descended upon my ears. The unholy persecutor of those deranged prophecies announced that ''Never bury your dead'' because ''way down deep, the dead never sleep. Cold graves are restless, so BURN YOUR DEAD!'' Getting hugely impressed by these words of wisdom, I grew totally attentive of the rest of the rituals to follow. The proceedings grew a lot more profound as the first ritual was ceasing towards a very enchanting end.


Totally awe-struck after the first ritual assualt, I turned on to the second one which started in a trance enducing groove which led to a path of infernal damnation.
Heavily sonorous drums and the abyssic grunts of the deranged ritual commander rocked my senses and left no room for reprieve. This particular ritual spoke of a ''Cannibal Abattoir'' where scenes of butchering the mortals and hanging their skins to the hooks was emphasized. It weaved a catastrophic scenario of mortal ruination and left behind gory scenes in my mind. Then I got hooked to the third ritual which emanated abruptly in a very bleak and chaotic manner. I had already envisioned spirits crawling across my room which weaved a labyrinth of dismay. But I just couldn't give up and threw myself into the maze of horrendous symphonies.


This ritual called as ''Centurian'' spoke about an evil pandemonium where a progeny of hell was supposed to crush the enemies with brute force. After descending into a hideous thump, I was immediately taken aback by the 4th ritual which started in a flurry of apocalyptic cacophonies. Diabolical summonings of rage continued to pummel my brain until the chaos ceased into a convulsive hymn of languish. The persecutor gave a loud groan of his conjuration and howled nefariously. As usual, the ceremonial hymn ceased into tranquility but it rised again as a crescendo when the fifth ritual began.
My auditory senses simply trodded with the sinister passage which was created by this abomination. It told me to rise up for a war, where I must wash away the filth of humanity as the lord of hell would arrive and devour it all. A stream of tumultous ardour ran through my veins as I was repeatedly crushed by the groovy dissonance of ''Ritual Executions''. Now, I felt a victorious gleam in my eyes and my head started moving to and fro with the morose crepitation.


The 6th ritual ''Blood Angel'' came, saw and conquered with its delightful yet vile raucity. It picturized an undead queen of vampyric descent who had an eternal lust for blood. Ravishing hymns of her praise were repeatedly sang and carried ahead with a bedlam of atonal rhythms.
Coming towards the final ritual, my brain was in an evil trance and I could see sweat flowing down my body. I immediately gulped down a few shots of water and went to hear what the decisive evocation had to offer. ''Death Metal Suicide'' was what it was called and it brought me out of the state of bludgeoning trance which had captivated me for more than 40 minutes. It was a soothing balm which was characterized by a subtle tonality and gloomy harmonies. But I was still dumb struck even after the ritual compilation got over because it left such a lasting impact on my brain, which was very tough to get over with.


After I gained my senses back, I tried to sum up the overall attributes of this bestial sanctification. I arrived at the point that The Dead had given birth to rituals so bizarre and foul, that it would be harder for anyone to stay away from its demented quality. I

t was a death metal ceremony t
o my ears and mind,  which combined the nauseous qualities of doom and the trance enducing fervor of stoner/sludge which had weaved ghastly components of calamitous disdain. Diabolical Conquest Records have really discovered a bestial horde which can only promise to march ahead in its colossal style and mow down the abysmal preachers of divinity forever!

Thy Only Forgotten - Mythos Daemonium (2009) 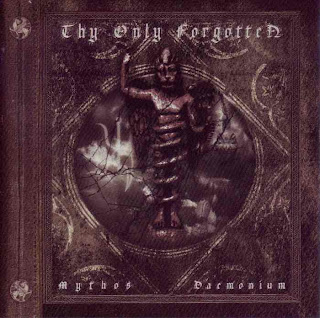 Whenever I gaze at the cosmic horizon, I feel an urge to submerge myself in its fathomless depths and get caressed by its colossal chasms. But this cosmic consciousness is not always easy to be achieved; it needs a special catalyst, a tool which can take you over to an unearthly trance of gloom.
To my ease, there are some charismatic entities whose epochal symphonies lead me to an astral path of illumination and I got a sheer taste of it recently by a glorious Mexican entity called as - Thy Only Forgotten.
Talking about this horde, they are not a recent congregation in the underground extreme metal scenario and actually formed way back in 1993. But they couldn't proceed further after releasing a demo in 1996. There was a nefarious silence howling in the voids since almost 13 years and that would have certainly pinched them. Enter 2008 and the band is resurrected, maybe by an abrupt vision of re-creating an epic demenaor which most of the bands of today's age lack.
Last year, they unleashed their first full-length entitled as ''Mythos Daemonium'' on Lux Inframundis Production. The band's status and important information is still pretty discreet since they insist on maintaining obscurity and haven't really published lyrics nor have a Myspace. But as far as I know, their current battalion comprises of the fantastic Antonio Leon (The Chasm fame) and his inputs are distincly audible in their recent offering.
Mythos Daemonium is all about atmosphere, a very beautiful and peculiar instrument which co-relates to an artist and his creation. He uses his tools to paint the impressions which he perceives in his mind and splashes them out in grand fashion. Some are able to perceive it but some aren't. The same thing applies for extreme  music as its not everyone's cup of tea to perceive disharmonies as dense and atmospheric as Thy Only Forgotten or The Chasm. But then the underground focuses on reaching out to a 'class' rather than a 'mass'. The musicians are nothing less than an artist trying to pour their earnest feelings out via their instruments.
The vocal passages, guitar tone and the overall charm possessed by this album is pretty much reminicscent of The Chasm - especially their latest offering Farseeing the Paranormal Abysm. But that is pretty obvious because they have the mastermind - Antonio behind them both. The basic thing which struck me on hearing the album for the first time was the slower, melancholic passages. It felt as I am drowning in a stream of psychedelia and getting deeper in it after every listen. This is the sheer power which atmospheric music can portray! The way it hypnotizes you is splendorous.


Subtle tremelo melodies work like a potion to keep oneself enraptured and swaying with the terrific passages of gloom which makes you feel like eternity.

If I have to describe the overall grandeur by a mere exclamatory obligation, then I dont think that I would have anything else coming out of my vocal chords apart from - wow!
After dripping myself totally into this release, I would have also loved to get an insight into the lyrical theme but sadly, I couldn't find any. Going from the name and the cover art, I can at least perceive that it has some relation with Aztec mythology, displaying visions of conquest and triumph. If anyone has them, please let me know.

But now, I wouldn't just conclude my article in a tad clichéd manner but would rather share a few honest words. In this short-lived life marred with despondency and traumas, there are only certain things which are capable of giving a feeling of glory and content. Extreme metal is one of those prized entities for sure, and bands like these are sheer exemplaries of what I am talking about. If you share a similar vision and want to have another 40 minutes of veneration, then Mythos Daemonium would be one of those cherishable moments for you.
Posted by Ankit at 9:37 AM 1 comment: