Gnaw Their Tongues - An Epiphanic Vomiting of Blood (2007) 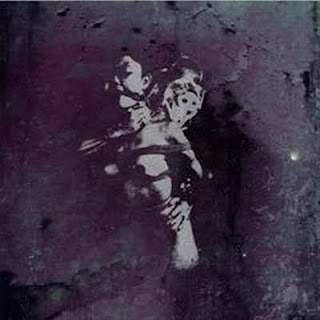 There was a time in my life when I was on the hunt for the most extreme music possible. Music that would make you want to rip your face apart with your bare hands. The music that would completely fuck you up mentally. More often than not, I found solace in many of Mories' various projects. Mories is an artist who produces the most fucked up, abrasive, terrifying music that I have had the pleasure of listening to, the best bands being 'Gnaw Their Tongues', 'Aderlating' and 'De Magia Veterum'. I stopped listening to this stuff some time back so as not to burn myself out, but decided to give this album a listen a day back. And I have to say, what I heard literally grabbed me by the balls and flung me across the room.

I heard the first track and was very impressed, but being the idiot that I am, I decided to perform the acid test, i.e listen to it while taking a walk at 3 in the morning on a pitch black, winter night. And the experience was simply tremendous. I will not describe the music much, because it is virtually impossible for me to do so. The moment I pressed Play, I was sucked into a vortex of an inhuman howling noise, distorted seismic drone, chilling keyboard noise and an almost random drum pattern. Various samples are used and these add to the coldness of the music. Most of the samples are from horror movies about serial killers calmly describing the death of a few innocent people. This when merged with the music makes radiates a disturbing, ghastly feeling that can not be expressed.

On to the whole listening experience. I have to say, this was perhaps the most intense and difficult listening experiences I have ever had. The moment I pressed Play, I was possessed by some force. Something terrifying and foul. It felt like something nameless and shapeless just rose from the darkness and was just waiting to envelope me. On to the second track, 'Teeth That Leer Like Open Graves' and possibly my favorite one, I felt like time had stopped still. I was being unknowingly dragged into a void where I couldn’t rise up from. The 'fear' gripped me and I just ran. What I ran from I do not know, but there was something menacing about the night. I could imagine the shadows shifting and a strong force appearing. A force filled with the stench of negativeness and death. You almost feel suffocated by it. It was at this moment that I turned back because I was too terrified to go any further. By the time I got home, I had not heard the last track yet, but I simply could not bring myself to listen to it. Drained of all energy, I just went back and switched the music off; and my mind suddenly went numb and blank. As if nothing had ever happened.

All I can say is, this music is not for everybody. In fact, I dont think it is for most people. This band blows away every other band who claim to be the 'sickest' and 'most vile'. Don't listen to it if you are hoping to listen to some instrumental 'proficiency'. This is more than that. This is far more terrifying than any horror movie. This is pure audio terror. Disturbing and devastating.
Posted by Gautam at 6:26 PM No comments: 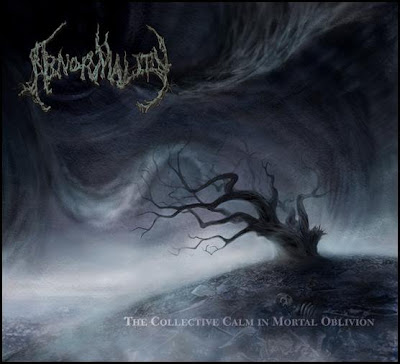 EP , October 2010
Self Released
Abnormality is  a death metal ensemble hailing from Marlborough, Massachusetts (USA) who have been kicking some serious ass ever since their inception in 2005 but are surprisingly underrated, even after exuding some ferocious talent through their sonic onslaughts. The band comprises of Mallika Sundramurthy who is perhaps one of the best female vocalists in death metal along with Josh Staples (Bass) who has also served time in Sexcrement, Incinerate, Neuraxis etc. Jay Blaisdell (Drums) from Goratory, Teratism and Compost Pile, Ben Durgin and Jeremy on Guitars who have also served time in Revengeance and Iranach respectively.
So far the band has just two releases under their kitty, both being self released demos, but some high class gut wrenching death metal. Whilst their debut demo in 2007 was packed with some great moments and excellent musicianship, their latest offering ''The Collective Calm in Mortal Oblivion'' has taken the ferocity and tightness to a newer level.
This self released mini album was unleashed during October, 2010 with a suave blue-greyish CD cover layout, the art of which was made by the band's vocalist Mallika herself. There are 3 songs on this CD and it kickstarts with the title track which begins it surge with a nicely faded in riff, which eventually paves way for a groove laden instrumental, with a little bass solo and then the vocals kick in to give you a thud in your face. Even before you could help yourself to get some reprieve from that mighty punch, an absolutely catchy and well laden chorus smacks your cranial tissues once again. The vocals here are pretty interestingly laden with a screamed segment for the chorus, until an abrupt growled section comes ahead to finish it in an ominous manner.
This track is pretty much mid paced and groove induced with ample double bass sections and catchy rhythms. But this is just a prelude to the mayhem which the upcoming two tracks would relinquish.
Mallika's tortured scream emanates just after the faded out outro of the opening song and smashes your eardrums with a plodding fury. After that there is absolutely no escape from the impending carnage of this furiously beautiful song, aptly as ''Hatred Relentless''. You could actually notice the amount of relentless hatred being rushed out from the ravishing riff frenzies which the song gushes out on your ears. The entire track is a deftly etched work which spews out  sublte melodic leads and a solo, nicely intervowen with carefully crafted chaotic riffs. Yet another impressive element of this album.
The grand finale to this already excellent album, ''Zealotry'' is perhaps the best composition as far as cratfy musicianship is concerned. Its power packed with the exact formula which Abnormality have banked upon, which is a zealous blend of sublte melodies with dense power chords and down picked rhythms. The interesting and spontaneous flow of riffs and the time signatures just don't let the attention to draw anywhere else. I must add that its pretty appreciative of the band to employ musical complexity without the usage of the cliched sweep arpeggios and fretboard wankery, which a lot of bands and people consider ''technical'' for just no worthwile reason. I wouldn't say that Abnormality play ''technical'' or ''brutal'' death metal, which are just some bastardized tags.
This band doesn't really require any such unscrupulous tag. They play uncompromising death metal which banks highly on deriving high quality death metal which doesn't shy off from employing the usage of subtle melodies, of course intervowen with a flurry of riffs and tight percussive demeanor.
If you appreciate your death metal to be the way it has been mentioned above, then you should certainly check out this MCD. I wonder how are they even unsigned till this date. Any labels/promoters reading this review, please help this talented band to get their morbid visions on the underground death metal platter. I am sure that they are going to crush more skulls by their upcoming cacophonies!
Check out Abnormality on their Myspace to order this album
http://www.myspace.com/abnormality06
Abnormality on Youtube
http://www.youtube.com/user/abnormalityofficial/
Final Verdict - 3.5/5
Posted by Ankit at 9:27 AM No comments: