Until the next Gig Attack!
Posted by Lethal at 11:09 PM No comments: 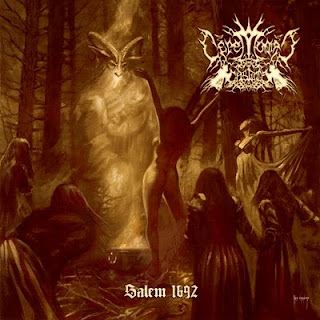 Ceremonial Castings is quite possibly, one of the most underrated Black Metal bands from the USA, but have never garnered enough recognition. And that is the reason I wrote this review. The review is about their 6th full-length release titled “Salem 1692”. As the name suggests, “Salem 1692” is a concept album about the Salem Witch Trials in Salem, Massachusetts in 1692. Supposedly Nick and Jake Superchi are direct descendents, thus establishing a direct link to this event.

I shall skip the history lesson and go straight to the music. What you will see here is a different ‘Ceremonial Castings’. This album is less chaotic and brings forth a more melodic approach which works brilliantly. From the first track, we are thrust into the world that was in 1692, A world that is alien to us, but a world that is more menacing and evil than we have ever experienced.

The album opens with an atmospheric intro which is a nice keyboard melody and immediately builds into a crescendo of chaotic raw black metal. Jake’s vocals kick off at this point and you cant help but feel a chilling atmosphere of evil around you. This gives way to a brilliant riff which has to be heard to be believed. It will make you stop whatever you are doing and make you listen to this with every ounce of concentration that you possess. Jake has outdone himself with the guitars. He brings forth a nice mix of lightning fast riffs and slow, mournful ones. The riffs are aimed to mesmerize you. It is almost as if you are caught in a spell, where you cant do anything except listen to this album.

The vocals have always been one of the best aspects of Ceremonial Casting’s music. And as usual, it does not disappoint. Jake has a vicious shriek that just grabs you by your throat and He uses some guttural vocals as well, similar to the ones used in the previous releases. Nick uses some clean vocals that imparts a feeling of calm to the listener. Female vocals are used at a few points in the album and the result is simply stunning. She has a beautiful voice and mainly depicts the story from the “witch’s” point of view.

The drumming is also different from the previous releases. Gone are the constant furious blast-beats, to give way to a varied drumming pattern. The best feature of the drumming is that it does not take anything away from the music, but simply enhances it. The blasts still remain, but are used lesser than before giving way to a slower repetitive pattern that does its job of slowing the pace of the music down a notch.

Now to the best aspect of the album – The Keyboards. Nick has done a brilliant job with the keyboards and the synths. The keyboards sound magical and create a perfect atmosphere and depth to the music. It is masterfully done, and I honestly have not heard keys being used so effectively for a long time. It is used in the perfect amount, without sounding cheesy or too pretentious (read : Dimmu Borgir).

The production is perfect. It does not sound overproduced. The sound retains the raw grimness, but every instrument can be heard clearly. Nicely mixed and everything sounds great. Still no bass, but the lack of a bass is not a problem at all. It does not affect the music whatsoever.

In my opinion, this is better than any history lesson. Hardly ever will you hear an album this powerful. It takes you on a journey through time. A time where the farce known as 'religion' dominated the world and poisoned people's minds. This is a release that should not be ignored. Its almost as if you are experiencing it yourself. So, turn on the speakers and listen to this release and find yourself in a world; a cold, evil menacing world. Enjoy the ride. This is not the best in symphonic black metal but is a very good release, all the same. And if you like concept albums, you'll love this one. 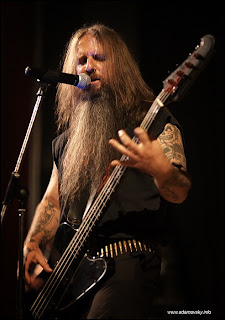 Infernal Dominion presents a very special feature for all our readers and it is nothing else than an audio interview done with the great Paul Speckmann from Master. It was quite an honor for me to do it when Paul asked me to and both of us enjoyed doing it a lot!


Here is Part I of this brutal interview on Blogger Video. I shall be featuring it on my radio show hosted by Brutal Existence Radio, USA the next time.