Morpheus Descends - Chronicles of the Shadowed Ones ( 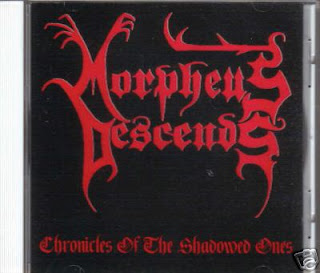 
''Chronicles of The Shadowed Ones'' is the second release by NYDM stalwarts Morpheus Descends and In fact their best. The band flourished in the early 90's when the New York underground scene was gaining world wide recognition with bands like Incantation, Suffocation, Immolation and Mortician creating a benchmark for other bands all over the globe. But sadly, not many people credit Morpheus Descends' role in this process. They were highly significant in defining the whole NYDM sound and this album is a sheer exemplification of their musical prowess.

This album clocks at around 32 minutes and leaves a profound Impression of Impending doom and catastrophe on the listener. It contains a sinister atmosphere with heavy death/doom parts and brilliant riffing which reminds me of Incantation's Onward To Golgotha a lot. The guitars have played a pivotal role in defining the pessimistic and dark sound of this masterpiece. The dual guitar attack of Rob Yench and Bryan Johnston has been phenomenal throughout this testimony of diabolical art. There aren't any solos or guitar wankery here but a stellar, to the point performance. The pummeling riffs leave no stone unturned in tormenting the ears of the listener.

Jeff Riemer(R.I.P)'s vocal work is amongst the best in the whole death metal history which remind me of Craig Pillard'. His undecipherable gutturals were like Cobras spewing venom upon their preys. Tracks like ''The Cruciform Hills'' and ''Cairn of Dumitru'' have stellar vocal performances which perfectly compliment the sinister guitar work and percussion. He has created an evil web of Blasphemy through his Guttural narratives which haunt the listeners throughout the album. Like the lyrics of the title track says ''In the cruciform hills
Something evil lies, undead ''.

The next big highlight of this gem is the precise drumming. It contains an excellent double bass and pedal work with frenetic blasts at times. The snares create an explosive sound which is perfectly in sync with the riffage. Its an amazing fact to see such a good sounding drum mix on an Independent release that too 15 years ago! Sam Inzerra may not have achieved anything path breaking but he was Instrumental In making this album a gem through his percussive skills.

Overall, This album is a timeless classic which stays pristine even after 100 listens and it's fiendish, majestic feel never ceases to erode. I highly recommend Morpheus Descends to all the old school death metal aficionados and i guarantee that this album would become the soundtrack to your horrific nightmares.