Cemetery Urn - The Conquered are Burned 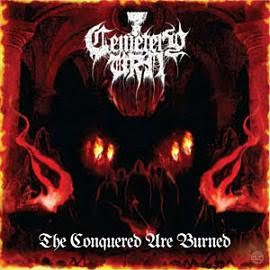 Cemetery Urn, a quite recent addition to the cavernous dungeon of Aussie infernal glory are back with a tormenting compilation of bestial hymns for the appraisers of ancient Death Metal, (anti)christened as ''The Conquered are Burned''. Though this evil congregation was formed in 2007, their bandwagon isn't new to the Aussie extreme metal movement comprising with members from Corpse Molestation, Kutabre, Bestial Warlust, Abominator etc. These hordes have already created ghoulish impressions on the Australian as well as worldwide extreme metal front with their merciless hammering on the essence of weakened mortals and their appalling faiths. So by reading these above lines, people who are new to Cemetery Urn's brand of abominable deathvastions can get a bleak idea as to how they should build up their expectations from them.

Recorded at Three Phase Studio, Melbourne, between April - November 2009, the album comprises of 8 horrific symphonies reeking highly with the destructive sound reminiscent of a mixture of the old American and Swedish Death Metal of the early 90's. Death's Turbulent Fire starts off the proceedings of this brutal bludegoning and does it with elan. The opening riffs highly reminds you of Swedish undeground legends Necrony and the guitar tone is a tad similar to that exhibited on Pathological Performances. Now as your mouth starts watering already, you are exposed to the guttural rasps of Damon who enunciates the inception of raging war on the heavenly blaze and militaristic hammering on the drums enrapture you further.
Even before you could get some reprieve from the carnage forged on you by the first track, The Plague of Annihilation emerges out and destroys your cranial juices even more. With a frenzy of downtuned sludgy riffs, a catchy yet crushing chorus and mayhemic drums, you get the vibe of good old Incantation's first and sophomore albums specially towards the ending of the track where a subtle doomy passage rings a bell of some similar parts in Mortal Throne of Nazarene. More Incantation worship follows in the songs ahead - specially Wrath from The Grave, whose intro passages and riffs reminds of Decimate Christendom, a la Dying Divinity. The track begins with a catchy riff and then abruptly, you get a thud on your face by a frenzy of instrumental ecstasy which consists of quite a few tempo changes, from groovy double bass sections to grinding dissonance.
Possessed Terror and ...Of Spectral Dominance continue in a similar fashion and enamor one's auditory senses with more muddy riffs and hooking solos.

A Cemeterial Reaping kick-starts with a captivating melodic lead and converges onto a belligerent solo after which paves way for blastorocious maraudings, taking the track onto a newer level of lunacy. However, the track mostly comprises of fast paced sections, there are subtle mid paced grooves and hooking riffs which make it sound thoroughly enjoyable.After 33 minutes of indimidating sonic torturing on the conquered souls, its time to finally burn their naive embodiment and this gruelling work is perfectly ritualized by the concluding title track The Conquered are Burned. Its furious warlike hymn starts off with a mighty blaze in form of its compelling opening riff which clearly indicates the captured ones that their end is near.

The deterioration begins where Damon yells:
The Conquered are Burned -
smell the boiling blood
The Conquered are Burned -
see their feeble demise
These terminating enunciations continue until Andrew shoots out a final incantation out of his axe and the initial chaos returns back to finish off the proceedings.
Stench of the burning dead emanates from the speakers as Damon rejoices and yells out - They Fucking Burn!!  like an ancient demon lusting for blood.

Overall, Cemetery Urn have certainly made a notch with their second album which is a tad more focussed and well composed as compared to its pre-decessor. The production has also been improved on this one where it still maintains the sewer-flavour of the ultra low guitar despondencies but hasn't gone indistinguishable with the vocals and drums. This was a slight dilemma which had marred Urn of Blood where many parts became quite dissonant, making it little difficult to comprehend the instrumental intrications. Talking about the artwork, a simplistic yet impressive inlay and cover art by Daryl (Funebrarum, Disma etc) provides the perfect idea of the hauntings being unleashed by the album.
This album is going to make a mark on the Aussie underground and would place the band on the ranks of other recent bestial Death Metal hordes like Ignivomous and European acts like Cruciamentum and Dead Congregation. Even though the album is a fanatic worship of the gods of blasphemy - Incantation, it doesn't sound like a cheap and effortless rip-off which some bands come up with. Its indeed a dutiful ritualistic worship which is more often needed from upcoming bands to keep the reverence of the mighty archangels of death and destruction alive.

Buy it and support their diligent death-prayers now!