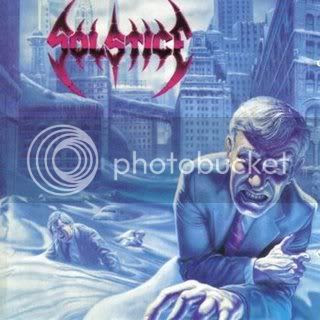 In the genre of Old School Death/Thrash, ever since it's inception in the 80's, the most notoriously famous bands have delivered some promising music which have influenced scores of musicians and bands alike to continue the tradition and keep the flame burning and also fuel it into an inferno of sorts. Florida based four-piece entity Solstice did the same when they released their first full-length self-titled album in 1992. Album opener 'Transmogrified' starts off with a vicious attack and sets the ball rolling for the listener to soak up the madness to follow for the rest of the album. Guitarist/Vocalist Rob Barrett brings in a unique style of vocals employing brutal shouting along with handling lead guitars very well with some sick tremolo picking. Rhythm Guitarist Dennis Munoz joins in with his adroitly executed guitar interplay with solos that have a great 80's Metal vibe to them. The sharp, precise and well-written riffs are sure to linger in one's head for a long time. Bassist Mark Van Erp does his job well with the low-end duties to add some more meat on the bones and stays right on cue. Drummer Alex Marquez propels the intensity to higher levels with his highly intense, machine-gun fast staccato drumming. With copious amounts of double-bass and a few hard-hitting blastbeats thrown in for good measure, the entire listening experience becomes every air drummers' wet dream.

All songs have been written by Rob Barrett and Alex Marquez. The lyrics deal with Death, Suffering, Aberration and are similar in outburst to many other releases by bands of that era. A cover of Crossover Thrash band Carnivore's "S.M.D" includes backing vocals by James Murphy, Scott Burns and Tony Teegarden(ex-Cynic). James Murphy also lends his guitar talents on solos on the tracks "Cleansed of Impurity" and "Survival Reaction". The album's production is excellent owing to the expertise of the masterful Scott Burns (Atheist, Cancer, Cannibal Corpse, Obituary etc). All in all, A fantastic album and highly recommended to fans of Old School Death/Thrash who've missed out on this!
Posted by Lethal at 4:22 AM