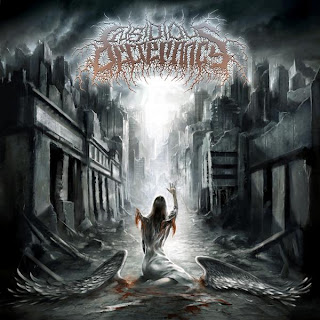 The one man ear gutting machine from Texas; Insidious Decrepancy has struck once again after a 4 year long hiatus with his latest offering called ‘’Extirpating Omniscient Certitude’’. Shawn Whitaker once again proves that he is the master of his style of Metal which is heavy, uncompromising and ugly. It always surprises me that how is he able to manage all the departments all by himself with such ease and precision. This compulsive ability makes him one of the most revered guys in today’s Brutal Death Metal scene. He has never failed to astonish the masses with his gruesome acts of butchery since his colossal outburst in the 90’s. The first profane progeny of this bespectacled genius was Viral Load which set foot on ’ soil way back in ’96.

The follow up to that cult classic called ‘’The Inerrancy of Profanation’’ took 3 years to disgorge its wrath unto the imprudent apostles but it satisfied the quench of his fans who were desperate for yet another gore dripping holocaust. I can never stop lauding the illustriousness of these two classics and it made me yearn for more.

And after a prolonged wait, he is back on the track once again with his third magnum opus to pillage the scene kids with his torturous cacophonies. The album clocks around 30 minutes consisting of 8 vehement tracks which rupture one’s cerebral vessels and torments the auditory senses. It’s what I define as ‘In your face brutality’ which comes punching straight onto your eardrums and they begin to plead mercy from the unholy desecrator. The first track Contemptuous Inception gives a perfect idea of how the rest of the album is going to treat you. An absolute monstrous riff marks the opening of the song and hell breaks loose. His signature riffs are worth worshiping and that’s what maintains the high amount of originality exuded by the master of Texas Death Metal. The lead sections are terrific as usual but he is hasn’t employed them in full glory in his latest offering though. The title song ‘Extirpating Omniscient Certitude’ begins with a melodic lead and soon fades into his enormous gutturals just like the calm before a storm. He possesses a bewitching ability to change from leads to the rhythm sections which is awe-inspiring! His mighty axe almost resembles a medieval spear craving to taste the blood of ludicrous mortals.

Another great highlight on this album is the flawless drumming. It’s highly noteworthy to see that how someone can manage such intricate drum patterns through programming. I am not a huge fan of programmed drums but this dude totally makes an exception. Anyone checking out Insidious for the first time through the new album wouldn’t be even able to make out that it’s not a human drummer doing those machine gun blasts! A lot of people say that he should better employ a ‘real’ drummer made of flesh and blood to make his music more spot on but I don’t agree with that opinion. He is always able to do it better all by himself rather than being dependent on other musicians.

The insalubrious cover art by Par Olofsson also stands out and works out perfectly to showcase the pernicious attitude of this album. It depicts an angel whose wings have been amputated and she begs mercy from the iniquitous ghouls of hell to spare her seraphic soul from eternal damnation. It perfectly justifies the antichristian lyrical theme of Shawn’s music.

Another big reason of my immense admiration for this guy is his exquisite vocal delivery.

His style of singing (actually growling) is one of the most unique I ever heard. The amount of barbarity exuded by his gutturals is undeniably prodigious.

What is really special is the way how he abruptly transforms to malignant shrieks from his trademark gutturals and he has lived up to my expectation in this record too.

Songs like ‘Once Revered’, ‘Tribulation’ and ‘Adorned in Agony’ are great examples of his proficiency. The production on this album has also improved from his earlier efforts which make it sound even more colossal! Every instrument is clearly audible and distinguishable in the mix. Although some guys would complain about the absence of that sick ‘raw’ sound of the earlier releases but it hardly makes any difference for me until and unless the music is nicely executed. And Shawn hardly disappoints in that case.

His perfectionist attitude makes him a legend in today’s Brutal Death Metal scene.

I can easily say that this is his best performance since his path breaking debut album which caused a severe annihilation almost 7 years ago. There is not even a single moment of monotony where you would feel like switching over to some other record. That’s the hypnotic effect which Shawn possesses. His fiercely captivating and putrid hymns keep the listeners to the edge of their seats from the very beginning of an album and till its monstrous end.

Overall, this is a highly malicious dosage of evil Death Metal which is certainly going to create waves in the coming days and going to cement a rock solid position in the list of the most classic Brutal Death Metal albums ever created.

I wish him all the best with this release and also for the future and hope that he keeps on exterminating the masses with his slab of Texas Brutal Death Metal.