Embryonic Depravity - Constrained By The Miscarriage Of Conquest Embryonic Depravity is one of latest ensembles in the UK brutal death metal scene. They recently released their debut full length entitled as ''Constrained by the Miscarriage of Conquest'' on Italian label Permeated Records which also has bands like Septycal Gorge, Vomit the Soul etc on it's artistic roster and both those bands have slayed with their latest ventures.

There has been a sudden upsurge in the underground brutal death metal scene in UK with bands like Amputated, Fleshrot, Kastrated, Crepitation, Ingested, Infected Disarray etc raising the sickness quotient. Previously known as Odium Incarnate, Embryonic Depravity has joined this brutal brigade with elan.

I wouldn't really tag Constrained.. as something exceptional but the efforts of these British sickfucks are pretty noteworthy. This album is a must listen for fans of US style gut wrenching brutality. Like a majority of other brutal death bands, Embryonic Depravity take their basics from American goremongers Disgorge and given it their own twisted and deviant shape.

Their style can be easily described as ruthless brutal death metal with nicely layed technical dissonance. One complaint which I have is the playing length which is just under 27 minutes. There are a totality of 10 tracks so it makes up for an average of almost 3 minutes per song with the longest song being the title track which lasts for about 5 minutes. Another good factor which can be noticed is judicious usage of slams or breakdowns being employed. They are mixed with the merciless blast sections in a handsome ratio and doesn't let a monotone to evolve. 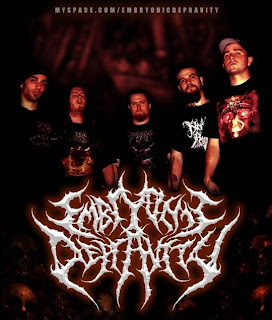 These young musicians seem pretty spot on with their musical intricateness. Rob Newson the vocalist has delivered a ferocious guttural onslaught which is bound to create a buzz in the listeners ears. The dual guitar bombardment by Pete and Will is also well executed a la Severed Saviour, latest Deeds of Flesh and somewhat Defeated Sanity. The percussion has been fairly good with efficient double blass sections, grooves and hyperblasts. The mixing and mastering has been conducted at the 16th Cellar Studios in Italy who have previously worked on Hour of Penance, Blasphemer (Ita) and Vomit the Soul and have granted this album a great modern sound. All the instruments have been fairly audible and maleficently fluent.

So it has been a promising overall effort by these young turks and has left me enthusiastic about their future material. Currently they are looking forward to massacre UK with the upcoming ''Erasing The UK Tour'' where they would be sharing stage with Amputated and fellow label mates Septycal Gorge and Vomit the Soul. A good exposure would do the trick for these guys and the rest would be done by their musical artillery.

Official Myspace:
http://www.myspace.com/embryonicdepravity
Posted by Ankit at 3:36 AM