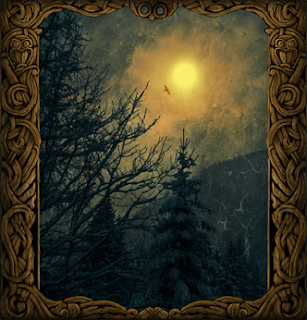 I have been listening to a lot of atmospheric black metal lately, and I noticed a lot of hype surrounding this debut by Wodensthrone. I generally stay away from releases that are exceedingly hyped up by people, because they always tend to be disappointing and fall way below my expectations. I decided to give this a listen but totally forgot about it; until a couple of days back. I listened to Loss in a recent train journey where it was just me passing through scenery full of trees, fields and a lot of greenery. And it just thrust me in a trance-like state and I couldn’t snap out of it till it finished one entire spin. Throughout the 70 odd minutes, I felt like I was in a different place. A different world, where time stood still.

Wodensthrone are a 5-piece band from north England and their music, while undeniably black metal has a lot more to it. They use a variety of instruments such as a flute, keyboards and even a harp (at times) without sounding annoyingly ‘epic’ or pretentious. The songs bear similarities to ‘Wolves in a Throne Room’, ‘drudkh’ and ‘Weakling’, but this band is not a cheap imitation or a clone at all. They are an excellent band in their own right and Loss has just proved it.

The atmosphere generated in this album is spectacular. You feel yourself getting lost in it as the world passes you by. The production is excellent. The lo-fi production adds another dimension to the music, but all instruments are clear and audible. The Songwriting and musicianship is brilliant and very mature, which is very impressive considering that this is their debut album. The riffs are excellent; They alternate between crushing brute force and beautiful melodies. The softer acoustic and clean sections are simply stunning and very nicely used and are hypnotizing, to say the least. Keyboards accompany almost every riff and is a very prominent feature of this album. But its not overdone and does not ruin anything. It creates a brilliant atmosphere that does not let go of you till the end. The vocals are mainly shrieks. There are certain variations at some parts when they add low raspy vocals too, but they are hardly used. The drumming is very good. The best element about it was how seamlessly it fits in with the instrumental passages as well.

As good as the first 3-4 tracks are, the later half of the album is what excels and places this release in a different league altogether. ‘Black Moss’ is an epic which features some brilliant riffs and has plenty of complex twist and turns. Hréowsian on drums excels in this song. ‘Upon These Stones’ and ‘Pillar of the Sun’ has one of the most beautiful instrumental sections I have heard in a long time. The final track ‘That Which is Now Forgotten-597’ is the most atmospheric track of the album and provides the album with a very enjoyable conclusion.

In short, Loss is a brilliant album. An absorbing listen and it leaves a profound impact on the listener. It would definitely make it to the top-3 releases of the year for me. These 5 guys know how to get it right. A pagan/black masterpiece which is definitely worth your attention.