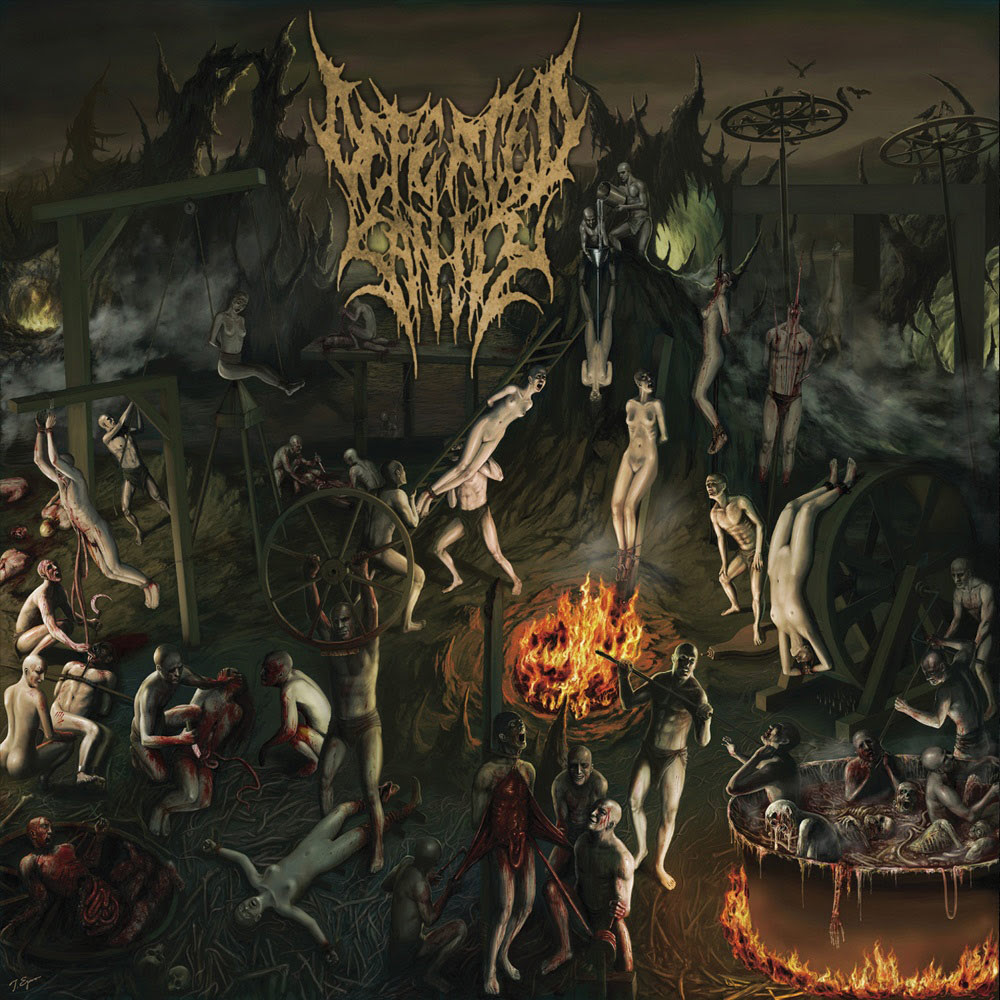 My quest and thirst for brutal death metal was reaching its climax somewhere in 2006. Upon suggestion of a close friend, I was given a few burnt CD’s to check out. Mithras, Spawn of Possession, Psychofagist just to name a few…and “Prelude to the Tragedy”. Immediately after listening to the foot stomping riffs and grooves of Horrid Decomposition, I knew this band would be one to keep my eye on for sure. At the time, not many of my peers knew of this unknown German death metal band and just like many bands of this underground death metal genre I was not expecting another full length effort and for the band to disappear because of the lack of enthusiasm towards Defeated Sanity.

Fast forward to early 2007. I kept my ears glued to the ground for a new offering by Defeated Sanity, and was enamored to hear that they would be releasing a new second full length titled “Psalms of the Moribund”. From the decaying bodies on the cover, to the disgusting sounding inhale guttural onslaught brought by Jens Staschel, to the mind blowing assault of technicality of Christian and highlighted by the blasting brilliance of Lille Gruber, I was hooked. Shortly following the release of “Psalms” came a small but very crucial tour with NY’s Copremesis in where I had the pleasure of standing behind Lille’s drum set in a crowded New York City basement while Defeated Sanity ripped through Psalms of the Moribund in full. My respect and love for these Germans grew immensely after their performance. Watching Lille shred through songs like “Stoned then Defiled” and “Engorged With Humilation” in person was captivating and inspiring. The band did not move much from casual head banging and staring at their instruments but the intensity was felt. It is rare when you find a band such as this who can replicate the same feeling as is on their CD’s but they did and they gave the small yet diligent New York crowd something to remember. Unfortunately, touring appeared to be a lot for second guitarist Wolfgang Teske and came to the decision to step down from second guitar duties after their U.S tour and shortly after Defeated Sanity parts ways with Jens. My suspicions from 2006 were coming true and I was disappointed in the decision, but I witnessed them already so I had no real need to feel let down. I eagerly hoped for Defeated Sanity to return because Psalms was too strong of a record to part with.

Suddenly…rumors and hyped circled Defeated Sanity after the 2007 promo was released including rehearsal videos without vocals and many wondered who could step in after the incredible performance by Jens. It seemed like only a dream amongst fellow Defeated Sanity fans but the idea of getting A.J Magana or Matti Way was heavily discussed. Finally, it was announced that A.J Magana of Disgorge fame would be doing vocals on the new Defeated Sanity record and all of the fans’ prayers were answered. Defeated Sanity released the first single from the CD titled “Carnal Deliverance” and it was swallowed whole by the underground. They later released another single titled “Salacious Affinity” from the 07 promo, but amongst listening to :30 sec of the track, I had to stop. I knew something special was on the horizon. However, I was somewhat skeptical of A.J doing the vocals because his performance on the Deprecated and Disgorge records were very different than the Defeated Sanity approach used by Jens but after hearing the first track “Consumed by Repugnance” and viewing the live videos from Mountains of Death, the verdict is in: A.J Magana is back and he’s the absolute perfect fit for Defeated Sanity.

Chapters of Repugnance is the third effort by this trio featuring Magana and this record is crushing. Chapters clocks in at a little over a half hour, but trust me, you will need more than an hour to absorb the intracacies of Defeated Sanity’s music. The album begins in silence with “Introuis” and then fades in, very slowly I might add (I will assume this was done on purpose to make the listener turn up their speakers and then pound the listener to dust), with heavy-as-fuck grooves and the trademark Defeated Sanity technicality remnants of Prelude to the Tragedy. This instrumental track is a prelude (no pun intended) to the rest of the album and its relentless.

“Consumed by Repugnance” starts off with an amazing gravity blast accentuation by Lille on the beginning riff while A.J introduces the mayhem of his vocal chords. The song wastes no time, 15 seconds in the slams are in full effect and A.J puts the dreams of the fans to full fruition. I consider this the best track on the album. In the midst of the breakdown riffs, Lille shows off his jazz influence to the max on this record and mixes it up with the trademark blast beats and blistering tempo changes. Most notably the jazz influence is apparent in the small but very tastefully fitting bass and drum solo around 2:48. The guitars then make their way into the groove in Meshuggah fashion but not before heading the listener back in the dirt and leading into Carnal Deliverance.

“Carnal Deliverance” the single track from the record intertwines the technicality of Prelude and the straightforward slamming style on Psalms. A.J’s vocal patterns are unrelenting, and he has not missed a beat at all. If I was blindfolded and someone told me there was an 8 year difference between Magana’s performance on “Consume the Forsaken” and “Chapters”, I wouldn’t believe you. Whereas I feel Jens fit the band solely based on his vocal tone, A.J surpasses him in vocal delivery and speed. This song mimics the approach on Prelude but the slams still break your face. The highlight of this song would be around the 2:15 min mark until the end. The beginning riff is repeated but slightly different this time, Lille shows off his percussion skills as he follows the bass line and moves to the next single, “Salacious Affinity”. Salacious may be my second favorite track on the CD as the riffs never stop your neck from moving. The song proceeds to blast away, with Lille hitting everything humanly possible behind his drum set. The bass lines on this song are key, and this song seems to be the most technical so far. Pay attention to the small little riff section :45 secs in, as it will repeat at the end. It is by far the best closing riff I’ve heard in quite some time. A.J’s vocal patterns on this song are slightly catchier than on Carnal Deliverance but they are hand in glove perfection. Another favorite riff on this album of mine comes around the 2 min mark, definitely proving they have not abandoned their trademark sound. 3:10 brings another massive break down with technical riff reminiscent of Malignancy and the aforementioned riff that first appears 45 seconds in.

“Engulfed in Excrutiation” brings back memories of “Fatal Self Inflicted Disfigurement” in terms of accessibility. Lille doesn’t cease his gravity blasting powers, and the song grooves into another slam section, it stops and at around :45 seconds in another favorite riff of mine shows itself. Shades of Prelude are once again shown and the highlight of the song is the neck breaker riff at 3 mins. A.J’s vocals shine brightly on this song once more and “Coerced Into Idolatry” begins. Coerced is very reminiscent of Salacious in terms of bass and drum interplay. The slams continue in the same fashion, but on this track Defeated Sanity decide to bring back the jazz influence as was on Consumed around 1:45. From here on out, this song is pure unadulterated chaos. I cannot fathom how Christian could write such twisted technical riffs but it is emphasized the most of this track. A small and very quiet guitar solo is displayed at 3 min mark but not before punishing you and the sounds of humanity dying on “Blissfully Exsanguinated”. This song is the shortest on the album but by far the most unpredictable. Lille’s gravity blast accentuations are genius at the :57 sec mark and proceeds to tear through his kit once again, switching from hi-hat to ride cymbal like cigarette to coffee. I must add that the production is ten times better on this offering than on Psalms. The guitars are significantly clearer but at the same time maintaining the muddiness that was on Psalms. A lot of these riffs under the previous production would have been lost, and I commend Defeated Sanity for realizing that this was the problem with the last record. The reverb on A.J’s vocals and the occasional double tracking gives the riffs such a menacing atmosphere that Jens did not bring. I also feel Jens’ vocals were a tad louder in the mix than A.J’s and at some points Jens’ vocals would overwhelm the riffs. The drums are mixed very well, I feel that the cymbals may be somewhat loud in certain spots but that is not a complaint as they are very needed to hear all the accentuations that Lille does.

“Calculated Barbarity” begins with a fast thrash beat held by Lille, not before blasting away into oblivion. This song is also on the accessible side as Engulfed was containing riffs that would catch the ear of your average brutal death connessieur. This song is the one with the most originality, as I feel the other songs still bear a influence and feeling of the previous records. The break down riffs are plenty with pinch harmonics. The highlight arrangement of this song comes at 1:30, I won’t say what goes on but the riff that Christian plays is very interesting to say the least. “Lurid Assimilation” is the final track of the album and my least favorite. This song from what I believe was written by Wolfgang and was on the 2007 promo. Another guitar solo is introduced at the 1:30 mark, this one being a little longer and better than the solo on Coerced. It is more of the same and the album fades out the way it started, almost the same way Psalms did and as it fades the listener is treated to some superb drum fills by Gruber. Whew!

Before putting Chapters in my CD player, my favorite slam record this year was “Post Abortion Slut Fuck” from Vulvectomy. This album destroys it and everything in its path. For fans who may not be into this technical style, I suggest you listen to this for an example of how playing technical riffs and break downs mesh perfectly. My problem with the record may just be that there are not enough of those technical moments that are on "Blissfully Exsanguinated" or "Calculated Infinity" to go around and a little too many break downs and that's why it is not a perfect ten but do not misinterpret that. I may even say this record with A.J may be better than Consume the Forsaken. For fans of Malignancy, Disgorge (US) and Deeds of Flesh, check this beauty out. I am glad that this band is still putting forth quality brutal death metal and getting the recognition they deserve because this is far from what I expected when I was introduced. This album should be renamed Chapters of Resurgence because it has revitalized my love for underground brutal death metal. If there’s any album to get, get this one. This is a candidate for album of the year if not close. Your neck may never be the same again. You’ve been warned. An encore United States tour is mandatory.