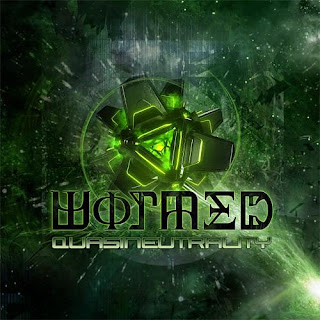 Single, 2010
Pathologically Explicit Records
Ladies and gentlemen, sit back and be prepared for the sonic apocalypse which has incarnated in the form of Quasineutrality - the latest venture by Spanish brutal death metal band Wormed.
Hear it? Yes its W-O-R-M-E-D.

The recruitment of Migueloud was a crucial step for the band's career and his armory provided a new dimension to Wormed's audial devastation. The duo of Miguel/J. Oliver created a spectacular frenzy of off time signature riffs and cosmic acoustic shreds (Uncoloured Plasma Orifices Transported). Miguel's incredible form since Human Mincer's epochal release Degradation Paradox is also clearly evident in the riff structures since the razor sharp tonality and hypnotic transitions are pretty much what were audible in that album. Added to that, there are some occasional slams too which spice up the intensity manifolds.

The mighty Phlegeton has been phenomenal on the vocal job yet again, spewing forth the deep croaked gutturals from the pits of his worm infested esophagus. Its interesting to note that he also took over the percussive duties after the removal of Andy from the line-up and he executed a flavagasting display of his unfathomed talent with extravagant flamboyance. For people who aren't aware of his multi-faceted musical prowess, Phlegeton handles drum duties for bands like Banished from Inferno, Unsane Crisis etc along with doing artwork, mastering and lyrical conceptualization too. This man is really an epitome for true brutal talent!

A ravishing green-oriented color scheme for the album art provides a required feel for the musical theme which surrounds a phenomenal (Physics/Chemistry) called as Plasma ( a gas in which a certain portion of the particles are ionized. The presence of a non-negligible number of charge carriers makes the plasma electrically conductive so that it responds strongly to electromagnetic fields. Getting quite nerdy eh? Nevermind! Hit Wikipedia for more info on this.)
Another noteworthy thing is that amongst  the heavy barrage of riffs and blasts, the sudden inception of those 'robotic' spoken verses and the alien-istic ambiance gives a chilling sci-fi feel to the music. Fans of Star Trek and Death Metal have really a reason to cherish now since they can enjoy both their favorite entities together in a gratifying mixture. So pick up your popcorn and nachos, sit back and get ready for a really enrapturing astral voyage to the depths of the luminous space.

Check out the band at - http://www.myspace.com/wormed