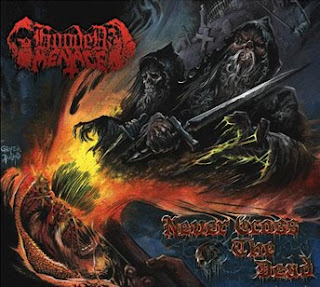 
With the sudden upsurge of bands playing the old school style of death metal over the years, it's practically difficult to come across bands who really are something worth listening to. Bands whom you can call as fairly genuine and not just another imitation of the older hordes. The mighty Razorback Records has been a sort of hub for most of these neo-old school death bands with constant releases from the abysses of US, Sweden and Finland. The label has given a lot of cherishing audial devastations to the staunch aficianados of the ancient death reign and Hooded Menace is no exception.

The band is no stranger in the death metal underground since their frontman Lasse  has been a formidable part of the Finnish death wagon from the past 2 decades or so. He started off with the underrated death/thrash band Phlegeton in 88 and released a few demos and a compilation album till date. But his fetish for the macabre didn't seem to cease as he has associated himself in a number of old school death metal projects namely Acid Witch, Claws, Vacant Coffin, Shrouded, Hooded Menace etc. He roared back into the scene with élan through the debut CD of Hooded Menace entitled as ''Fulfill the Curse'' which was a gargantuan lesson in true horrific death metal typically fashioned in the 90
s and cult horror sounds-capes influenced by the Blind Dead and other classic horror series. But the recent release ''Never Cross the Dead'' which saw a change in label to Profound Lore Records, is even a step ahead than the first edition in terms of the compositional prowess which the trio unleashes upon the listeners.

Clocking around almost 51 minutes, the album oozes with a sludgy and extravagantly doomy slab of death metal reminiscent of the epochal American and Finnish doom/death sound sauced up with a fairly modern production which actually provides an ominous shrill to the delicious down tuned riffage. Lasse's vocals are something which I find pretty unique and interesting among most of the death metal vocalists. I remember reading a recent interview where he stated that growling isn't really something which he cherishes doing and hence went for a more ''lazy'' and creepier sounding growling tone. But this reluctant laze has certainly been a blessing in disguise for the overall music of the band since the dense growling patterns lay a bizarre and ''zombified'' impact on the listener which can be perfectly related to the style of music they play.

The riffs are pretty lush and crushingly heavy with the grooves reminding of Cianide's A Descent into Hell juxtaposed with subtle melodic leads in vein of more traditional acts like Sabbath and Cathedral. Tracks like ''Never Cross the Dead'', ''Terror Castle'' and ''The House of Hammer'' are dripping with solid Iommi style leads which enhance the heavy demeanor to a great extent.

Pekka's drumming has been pretty minimal and straight forward as per the musical needs and it has just been a necessary support to the musical onslaught. Their obsession with the horrific realms have been again displayed to a good extent with their version of ''Theme from Return of the Evil Dead'' which manages to sound spooky and grotesque enough pretty much like what the original them but with a death metal tinge. A fantastic cover art by Putrid and great lyrics from the Razorback honcho Billy and Lucio provide an added dimension to the tenebrus atmosphere of Never Cross the Dead and makes it a perfect sountrack to listen to on a funeral night by the old cemetary and invoke the embalmed entities infested beneath earth's abyss.

Check out their tunes here - http://www.myspace.com/hoodedmenace