Dissection - Storm of The Lights Bane 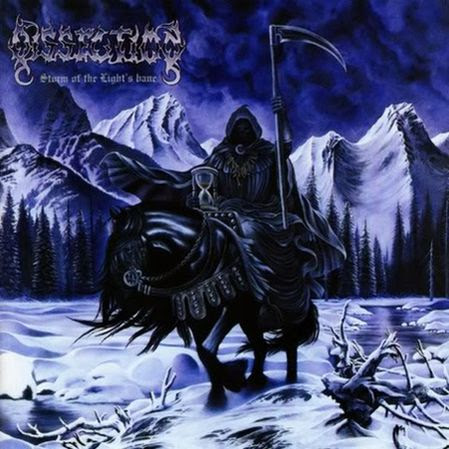 Full Length, Nuclear Blast Records
1995
Here I am reviewing an album that has been reviewed countless times. Majority of metal heads own this album, or at least they should. I picked this album for my second review because this album has always meant a lot to me as growing up and even still it is flawless and a masterpiece in my eyes. There is so much to say about this exquisite mixture of black and death metal.
Dissection formed in 1989 in Strömstad, Sweden and released 3 full length albums and numerous eps, live albums and demos earning themselves easily one of the most well known Swedish metal bands. Frontman Jon Nodveidt was convicted of murder in 1997 for which he had to serve 7 years in prison. Shortly after his release from prison in 2004, he resurrected Dissection with a new line-up and went on to create their last album 'Reinkaos' which was released in 2006. Reinkaos was a very different musical offering and it received a mixed reception from fans and critics alike. Just a few months after its release, Jon Nodveidt committed suicide in his Swedish apartment. It is said he killed himself because he completed all he wanted to achieve in life. In a way I agree with him because the two master pieces he created: The Somberlain and Storm of Lights Bane. Though the world of extreme metal lost a genius and a legend, his glory shall rest forever in our hearts.
It was an arduous task for me to pour my unending love for one of my most favorite albums in mere words but I somehow mustered the courage to do so. This colossal masterpiece entitled as 'Storm of Lights Bane' opens with a dark yet beautiful and haunting instrumental waltz intro "At the Fathomless Depths". It prepares you for the magnificent "Nights Blood" which begins with a perfect tom rolling drum while the guitars start off with a thrashy Slayeresque riff juxtaposed with melodic guitars which are reminiscent of traditional heavy metal a la Iron Maiden. Jon's lyrical brilliancy is another factor to praise with dark poetic lines like "I drown in the colour of your eye for a black heart will only find beauty in darkness" that will never leave your memory after hearing this song. His vocals are poisonous and scathing whilst being extremely soulful and decipherable. They blend perfectly with the guitar melodies and create a stellar and hypnotic effect on your senses. Another noteworthy factor is the implication of majestic acoustic guitar sections which creates a mystical atmosphere and relaxes you in the middle of the song while the tempo slows for the rest of the song. The most memorable song off the album “Soulreaper” is an icy and cold melodic blackened death masterpiece. Albeit the entire album is extremely memorable, 'Soulreaper' remains my favorite.
“Where Dead Angels Lie” is perhaps one of Jon's most epic creations. It's slow and mournful mood compels the listener to get lost in the arcane atmosphere which it weaves around oneself. "No Dreams Breed in Breathless Sleep" by Alexandra Balogh leaves to content and wanting to hit repeat on this beautiful, mournful piano piece.
I could seriously go on and on with these descriptions but then as I wrote earlier that describing a timeless classic like this in mere words isn't really possible. Their music is like a drug which hallucinates you and enslaves your senses with its grandeur. Nothing else would come closer to this magnum opus, ever.
The legacy lives forever.