Necros Christos - Doom of the Occult 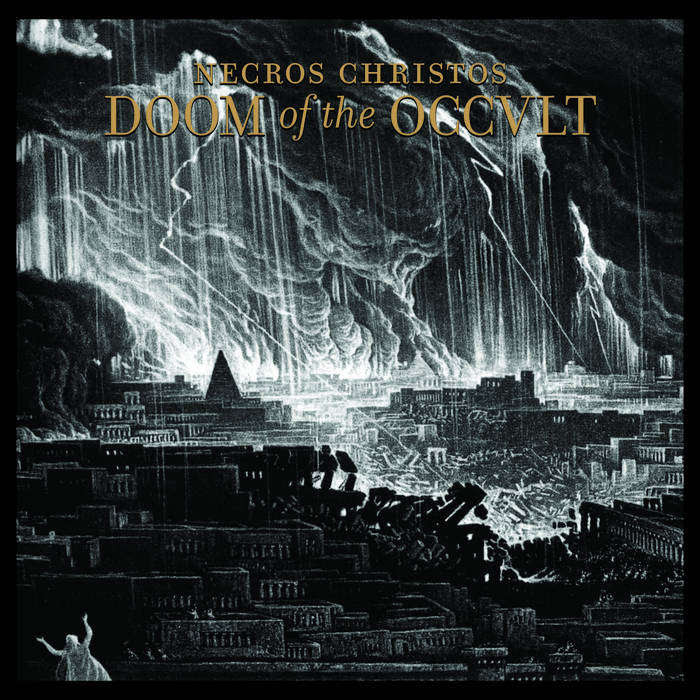 Full Length, Sepulchral Voice Records
2011
Necros Christos is a name which is well revered amongst the appreciators of occult death metal art and they have struck again with their sophomore album entitled as “Doom of the Occult” after a long anticipation. Their debut venture “Triune Impurity Rites” had left plenty of fans including myself stunned with its densely atmospheric and ancient atmosphere. Such was the charm of the album, that I almost felt enraptured amidst a black mass procession, which had evilness emanating from all over.

This malignant ensemble originates from Germany and conjures an ominous amalgamation of ancient occultism and underground death/doom metal through their malignant epiphanies. The driving force behind this sinister temple is Mors Dalos Ra, whose enchanted preachings have left a staunch impression on myself. He is a learned man for sure, who has employed the theories of the Old Testament, ancient Egyptian miracles, Middle Eastern deities and an inspiration from the emanations of the Holy Qabalah, ancient mysteries of temples and tombs and much more.

As intriguing as it sounds, this wicked soul has left no stone unturned in structuring his musical elements at par with the intricate lyrical themes he has employed. “Doom of the Occult” is an implausible example of the above mentioned features possessed by Necros Christos and it’s a tad better offering than their elite debut. What makes it so special is the way the rituals have been structured this time. The musical theme has been emphasized on Mors’ ancient Middle Eastern/Asian influences and they have been very suavely executed.

There are a total of 23 ritual hymns which constitute this juggernaut and they are divided as 14 instrumental interludes and nine death metal rituals. These are artistically crafted as preludes for all the nine necromantic psalms. Overall, the interludes are also divided as eight temples which are cathedral-ish instrumentals which introduce the “gates” . The “gates” here are acoustic Middle Eastern folk instrumentals which are beautifully carved by Mors again. Together, they add a highly exotic and arcane element to the album and serve as splendid introductions to the tracks.

Necros Christos’ most noticeable quality is the uniqueness of their sound and it has been suavely exemplified on “Doom of the Occult”. The compositional prowess on the album is highly commendable and thoroughly enjoyable. There aren’t any crazy sweeps or twisted leads to be found here. Its all about pure occult art. What impresses me the most is flow of the riffs which are catchy, down tuned and aurally devastative. The leads and especially the arcane solos are also very well carved and they keep the ears buzzing and gasping for more. Impressively, each song possesses memorable passages which get stuck in the head very easily. The main focus here is to provide ample eargasms to the listener with a mind numbing juxtaposition of cryptic middle eastern harmonies with death metal. But it’s certainly not cheesy or very accessible for any casual listener. Its very powerful, yet subtle at times. Mors and the Evil N. have done a fabulous job on the strings here and their coalition is what makes this album so bestial and profound!

I know that I just can’t stop praising Mors’ efficiency as a musician and hence I would applaud him once again for spewing some of the most baleful vocals I have ever heard! He had left a staunch impact with his demonic vocals on “Triune Impurity Rites” and he did it yet again on “Doom of the Occult”. His vocals give an astute feeling of an ancient Mesopotamian demon, who gives out a loud roar to pronounce the end of divinity from the planet Earth. His earth-shattering and rattling guttural onslaught is more than just an added flavor of this brilliant album.

Raelin’s percussive assault also deserves a praise since he has delivered a worthy performance with his drum kit. Since it’s a mid paced, doomier death metal album, he didn’t have to execute any triggered double bass attack or 300+ bpm blast beats but boy, he still didn’t leave any stone unturned in striking gold! The snare tone on the album is crunchy and sounds apt in the mix because it suitably justifies the hammering guitar tone. My favorite would be the introduction of “Doom of Kali Ma” where he starts off the proceedings with a gnarly blast beat passage and ceases down to menacing double bass sections throughout the track.

The bass is definitely present on the album and it flows around smoothly with the guitar’s but there are no individual bass moments except for “Hathor of Dendera” and “Invoked from Carrion Slumber”. Nevertheless, I don’t think that bass solo’s were very much required on the album. Black Sheperd Ov Doom has done his job neatly and provided the perfect tone which was required to enhance the heaviness of “Doom of the Occult”.

Even though each death metal ritual on “DOTO” is so deftly etched, there are some special moments which are certainly the highlights of the album. The stand out track according to me is “Doom of Kali Ma – Pyramid of Shakti Love – Flame of Master Shiva” which is a diligent hymn to the magnificence of the mythical Hindu occult deities – Kali and Shiva. The exceptional element of this track is that a lot of the lyrical content constitutes of Hindi texts which have been growled to such perfection that I was bound with amazement. Being a Hindu myself, it was an astonishing quality and I was dazed with ecstasy after hearing this hymn along with its brilliant and perfect lyrics. I can easily say that this soundtrack could become an anthem for the purveyors of occult death metal. “Necromantique Nun”, “Succumbed to Sarkum Phagum”, “Invoked from Carrion Slumber” and “Descending into the Kinly Tomba” are my other picks from the album. The solo on “Descending…” might be yet another spectacular element on the album. Though there are a few good ones to be heard, the one on that song is particularly very well carved out. Great efforts by the guitar duo!

Overall, “Doom of the Occult” constitutes everything which a mystifyingly evil death metal album should possess. The song writing is deviously enthralling even though it’s mostly one dimensional. Almost all the tracks flow in a basic pattern which comprises of heavy palm muted riffs, mid paced to doomier sections, fitting double bass, cryptic leads and brilliant solos. But it still doesn’t add a monotone since all the tracks carry individuality. The album is absolutely devoid of any frills and wannabe complexities. It is death metal done in the right manner! Every moment on the album reeks of class and exoticism.

I can keep the band at par with Grave Miasma who also share a similar musical direction minus the middle eastern influences. Their mid-paced, doom-oriented death metal music and lyrical themes also reeks highly of occult themes and exotic atmospheres. They are both class acts and share individualistic and dedicated mindsets which are two precursors for any band to carve a niche in a vastly populated “scene”.

In today’s time’s where abominations such as plagiarism and staleness are ruining the beauty of the art of death metal, it’s great to have honest and inspiring acts like Necros Christos around which possesses an impeccable demeanor . “Doom of the Occult” clearly exhibits that they are a sheer apotheosis of scrupulousness and musical dexterity. So, show your utmost support to these Germans and enter the gates of their diabolic temple right now!

A necromantic doom awaits you, as you ascend the abyssal stairs of this temple…
9.5/10
Official Site - http://www.darknessdamnationdeath.com/
Posted by Ankit at 9:00 AM