Nightbringer - Hierophany of the Open Grave 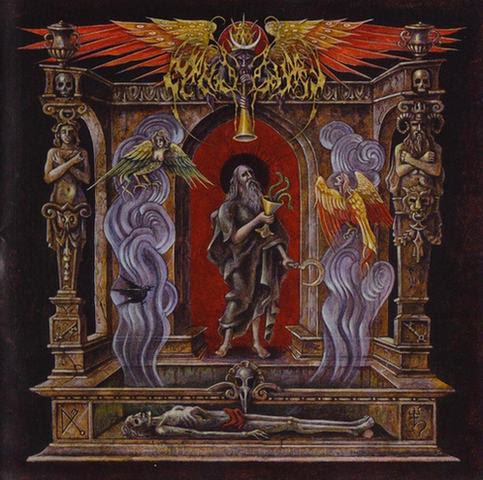 Colarado's visionary entity Nightbringer has been delivering a fierce brand of occult, esoteric black metal since a few years now. While they started off circa 1999, their debut album wasn't unleashed before 2008. The next full length entitled as ''Apocalypse Sun'' saw the light of day in 2010 and it was my first brush with the band's sonic alchemy. Honestly I wasn't too impressed with it upon my first few listens and decided to move on. Enter 2011 and the band delivered a new album entitled as ''Hierophany of the Open Grave'', within a mere gap of a year and few months. I was skeptical but still decided to give it a shot and didn't contemplate my decision because it changed my opinion about the band's music. It wasn't an easy listening experience because of the complex nature of the album but it eventually grew on me after several attentive plays. This experience may be paralleled with the sense of revelation one exults in, while re-reading a long lost book that had failed to create an impression due to the lack of understanding or inattentiveness.

'Hierophany' is certainly not your average, run of the mill black metal album which could be listened casually; while simultaneously grumbling that a certain riff was repeated for the umpteenth number of time. It is an hour long collection of alchemical and allegorical hymns crafted with intricate detail and meticulous labor. Benjamin Vierling's impeccable artwork acts as an enthralling visual medium in depicting the grandeur of the album concept which constitutes a suave depiction of a spiritual mortification symbolized by the alchemical nigredo in ''which one dies to one's profane sense of self, withdrawing from sensorial exteriority to be reborn within''. Nightbringer's conceptual profundity has always been spiritually rooted in the fathomless depths of the self and its synonymy with 'death'. 'Death' has often been depicted as a 'female' in their allegorical poetry which according to certain Left Hand Path techniques, is used as a force of sexuality which deals with transcendence of the self. The themes of 'death' here do not merely deal with the physical end of the body; they emphasize on the importance of spiritual transcendence through a gate of transition which goes beyond the conditioned existence of oneself.

The psalms presented on this release definitely do justice in portraying the mysticism of the lyrical aesthetic. Unlike many of the ordinary black metal bands/projects around, Nightbringer have always offered something majestic and unique. Hierophany is the epitome of their inimitability as it marks a lethal progression of the band's caustic and dissonant soundscape's. The compositions present on this release are extremely well carved, with a great attention to atmospheric details and instrumental complexity. Albeit the technicalities have not played an abhorrent obstacle in making the album compelling and noteworthy. They have actually enchanced the esoteric fervor of the music and the experience while listening to this sonic malevolence could be paralleled with the assessment of any masterpiece by Beksinski. Both of them are surreal and intensly rich in detail, yet they are able to strike a chord with the viewer/auditor after an in depth analysis. This is the quintessence of art and very few are able to relate with it.

Production values are superb and the overly trigerred drum sound of 'Apocalypse Sun' is gone. The guitars and bass parts were recorded by the band themselves and that is what makes them sound so exuisite. Compositionally, this is the band's finest attempt in harmonizing the dynamic tempo changes, massive tremolo picking and thunderous blast-oriented percussion which was present in their first two full lengths. Earlier, the song lengths were a cause of worry due to their somewhat tedious and over ambitious nature at times but these minor flaws have been corrected on the new album. Arcane melodies, acoustics, mid paced atmospheric segments and a proficient drumming assault make this album a grand affair. Naas Alcameth and Nox Corvus' fierce dual guitar/vocal assaults are inherently harrowing and enthralling. The combination of mid pitched growls a la Funeral Mist (albeit not as savage in their delivery) and demonic shrieks/howls works wonders in creating the required essence for the music. Their tremolo picked patterns are much intriguing and effective than ever and several odd pinch harmonics are also spread throughout.  Corvus and VJS have also done a commendable job on the percussion which is varied and more organic sounding.

Interestingly, ar-Ra'd al-Iblis (Acrimonious, Matrcide) has also contributed lyrics and vocals on the album. Musical dexterity hasn't been compromised for the sake of appealing newer listeners but it has only been improved with well crafted detail. This quality is rather absent from many of the newer releases I usually come across and that is why Nightbringer have carved a niche in the black metal paradigm with a release as baleful yet artistic as this.

Their brand of music is way ahead from what US generally offers and is more synonymous with what the French visionaries Deathspell Omega have been doing since the past few years. Although both their sounds are unique and unparalled, the area which both of them coincide is their arduous manifestation of black metal as an art form; something which has not been done on an appreciable scale. But the true virtue of art is the fact that it is able to stand the test of time, whereas the feeble entities perish in agony. 'Hierophany of the Open Grave' will be a testament of this virtue in the coming years as people shall slowly and gradually comprehend and appreciate the bodeful aura which it emanates. Followers of the current 'orthodox' and occult black metal scenario must take notice, as this album is almost tailor-made for your requirements. Others may stick to their nonsensical and juvenile trash, which is unfortunately branded and propagated as 'music' or 'art' these days.

Originally written for ''In Blackest of Hate#2''